11 Tips to Save Money on Healthy Food

When I first started eating healthy, I noticed that the products I bought were definitely more expensive than the less healthy products I had bought previously. The difference between conventional and organic produce was probably the biggest shock to me. It was a little frustrating, but I knew what my body needed, and I was okay paying more for that. Now, six years later, I’ve actually noticed that while I may pay more for some products, I spend less overall than I used to on food. I actually save money on healthy food.

But I still have people telling me, “Wow. I admire you for eating healthy, but it’s just too expensive for us.” Or, “How can you guys afford that?”

You may have thought something similar, and perhaps you are thinking that right this minute. I promise you, though, that it’s not as impossible to eat healthy on a budget as you think it might be. And I’d like to prove that to you. Here are 11 tips to save money on healthy food. 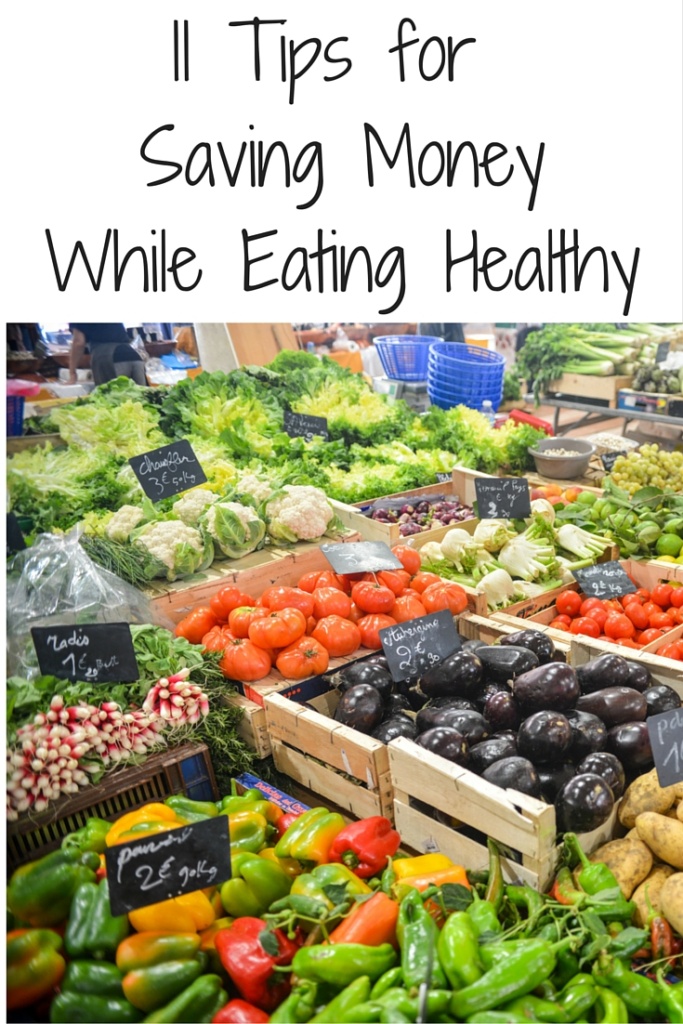 11 Tips to Save Money on Healthy Food

I’m talking packaged TV dinners, boxed open-and-dump meals, and especially sweets and snacks. Don’t buy them and don’t eat them. Processed foods cost ten times more than ingredients do, and I have yet to find a processed food that doesn’t have added sugar or strange unreadable ingredients, or that fits my criteria of being Paleo and dairy-free. A paleo pizza crust at whole foods costs around $9. Now, for being a quick meal every once in a while, it wouldn’t hurt your budget that much (and it’s cheaper than eating out). But if you buy 10 of those each month…that’s $90 you just ate when you could make it for half as much. I don’t care how much that box says Paleo on it…don’t be tempted to buy it.

I get that this is a convenience factor, but with a little bit of work, you can create your own convenience foods (see next tip!).

I cannot stress this one enough. If you take a few hours out of your week to make up a big batch of pizza dough, or vegetable broth, or my Green Chili Stew base (all of which you can freeze), then you will thank yourself. I know that it takes a little time, but if you are already making dinner, why not make enough for four dinners?

During winter break this last year, I stocked our freezer with frozen broths and soup bases, pizza crusts, beans, and pre-cut meats. It took me a couple of days, but we had quick meals in our freezer from January to March (which is the most time-intensive part of the semester for me). I could just throw a couple of bags in the crockpot, and then add some chopped vegetables (prep time=5 minutes). We saved so much money from not eating out! Most of the meals also cost between than $1-3 for two people. Tell me that’s not cheap! 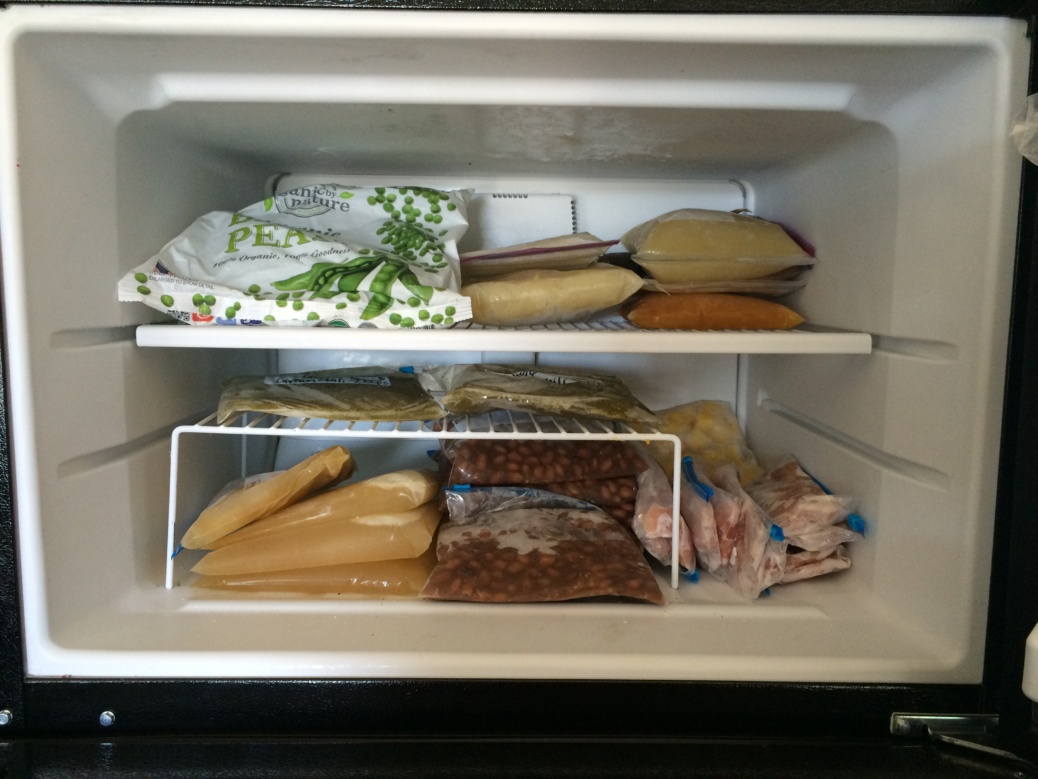 You could also do a meal prep for the entire week, chopping up vegetables for work and putting them in tupperware, salads in mason jars, or creating filling for lettuce wraps.

Simply calendaring out your meals saves a lot of money. Use your phone, your calendar, your daily planner, or a piece of paper you can stick on the fridge. Daily plans don’t work as well for me because I love spontaneity and I really have to be in the mood for certain types of meals. So I do a planning session once a week where I make a list of all of the meals that I would be interested in eating/I have the ingredients for. I put that list on the fridge with a magnet, and then I know what to shop for. 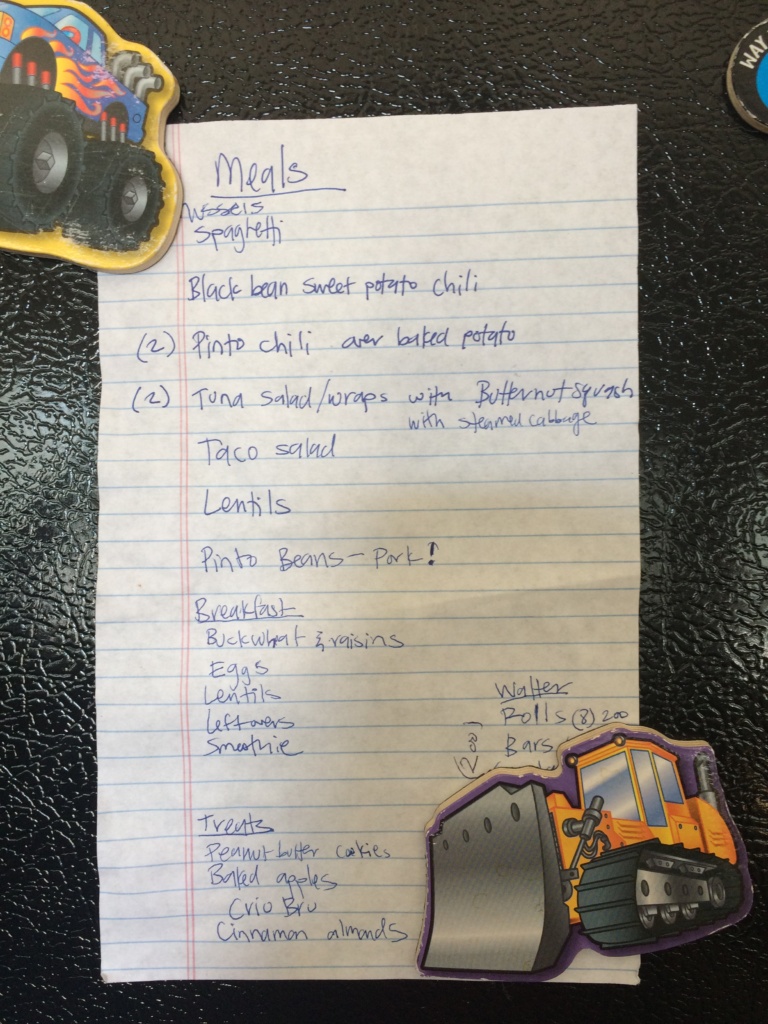 (Meal plan that is still on my fridge from 4 weeks ago…I need to practice what I preach!)

If I walk into a grocery store without a plan and without a list of items I need, I am 100% guaranteed to spend more money than I had originally planned. No grocery list means I don’t know what we are eating this week, which means that I will buy more of the easy, processed, expensive foods because I’m not prepared. What I love to do is take a picture on my phone of my fridge and pantry, and then spend 10 minutes sitting in the car outside of the grocery store and go over my meal plan and what items I need. Then I stick to the list as closely as I can. (Though to be honest, today I bought two things that weren’t on my list that I absolutely wanted. But I still saved lots of money!)

I know that the Paleo diet is about eating like a caveman (or woman), but meat is expensive, and organic, grass-fed, humanely raised meat is even more expensive. This year I decided to cut our meat consumption (first because I need to eat less meat for better health, and second because meat is expensive). As soon as I cut our meat consumption in half (literally), I saw my food budget go down significantly. You don’t need to eat a 1/4 lb of meat in your salad if you add in more food like vegetables, fruits, or legumes.

Veggies are dang cheap! Buy more veggies and your budget, body, and mind will thank you. Vegetables contain amazing minerals and nutrients that our bodies need to function. Even if you aren’t in love with vegetables right now, find a few that you do love and eat lots. I love spinach in my salads and smoothies because the taste isn’t terribly strong. I even throw it into my baby’s meals. (You know that Chocolate Pie? Yeah. I’m guilty of throwing handfuls of spinach in that.) The best part is that organic vegetables, while the sticker price is more expensive than non-organic, is that they are so much cheaper than buying frozen food. Yes, you have to prep them, but they are still cheaper. And, if you can afford a food processor, then the amount of time you spend chopping veggies goes down considerably. I love throwing every ingredient for my salads into my Kitchen Aid food processor  and not having any other work to do. It takes 5 minutes to prep a salad that way.

Eating out is the biggest money sucker, especially since your choices eating clean are limited or twice as expensive. It’s impossible to find anything to eat that is completely clean anyways. I have a few favorites, including Whole Foods salad and hot bars, and a few local health food restaurants that have food I can eat. Cut down on eating out, or if you have to (because I’ve eaten out a couple of times this week) set a budget for yourself.

8. Wait for Sales and then Stock Up

I love sales. I’m a shopping freak when there’s a sale (be it food, or clothes, or shoes). You’ve probably shopped clearance isles before, but have you thought about food being on clearance? Organic produce will often go on sale just before it begins to overripen, and boxed foods or body care will sometimes go on sale once every couple of months. The shampoo I buy from Andalou Organics usually goes on sale at Sprouts every three months or so, so I buy enough for three months and save quite a bit (it’s actually cheaper on Amazon if you have free shipping). And bulk foods like nuts and seeds go on sale occasionally (not as often as I’d like) so I’ll empty the bulk bin and take home pounds of nuts.

Group buys can be fantastic ways to save money. You can organize your own group buys with family, friends, and neighbors or, if you don’t want to organize one, you can research group buys on Facebook that you can join.Whether you are buying animal meat from a local farmer, or you want to buy bulk apple juice but can’t pay the full amount, finding a friend to buy half can really help your budget out. Don’t hesitate to join a coop or a group buy when you know it will save money and you can trust those involved. 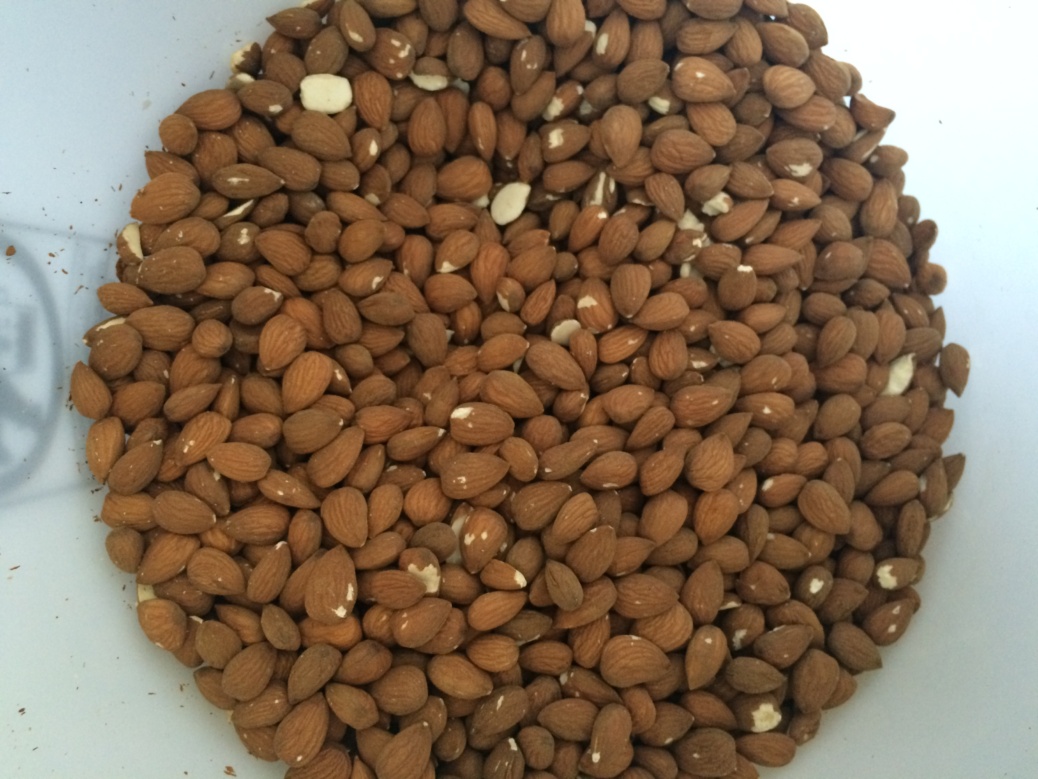 (75 lbs of almonds I bought through a Group Buy.)

10. Buy in Bulk from Costco/Sam’s Club or Online Retailers.

I know that Costco and Sam’s Club don’t have a lot of great options for those of us who eat healthy food (thought they sell the biggest boxes of taquitos and bags of chips that I’ve ever seen), I’m not talking about buying bulk ice cream bars. Consider buying a membership just for the savings in produce! Costco and Sam’s Club have pretty amazing produce sections with lots of organic options. I buy pre-washed organic spinach and spring greens to help save on prep time AND these items are so much cheaper than buying from most grocery stores. For example, I buy organic spinach that costs me $3.99/lb. I may pay up to $2.99 for an organic bunch of spinach (1/4 lb) at any supermarket and the quality isn’t as good. 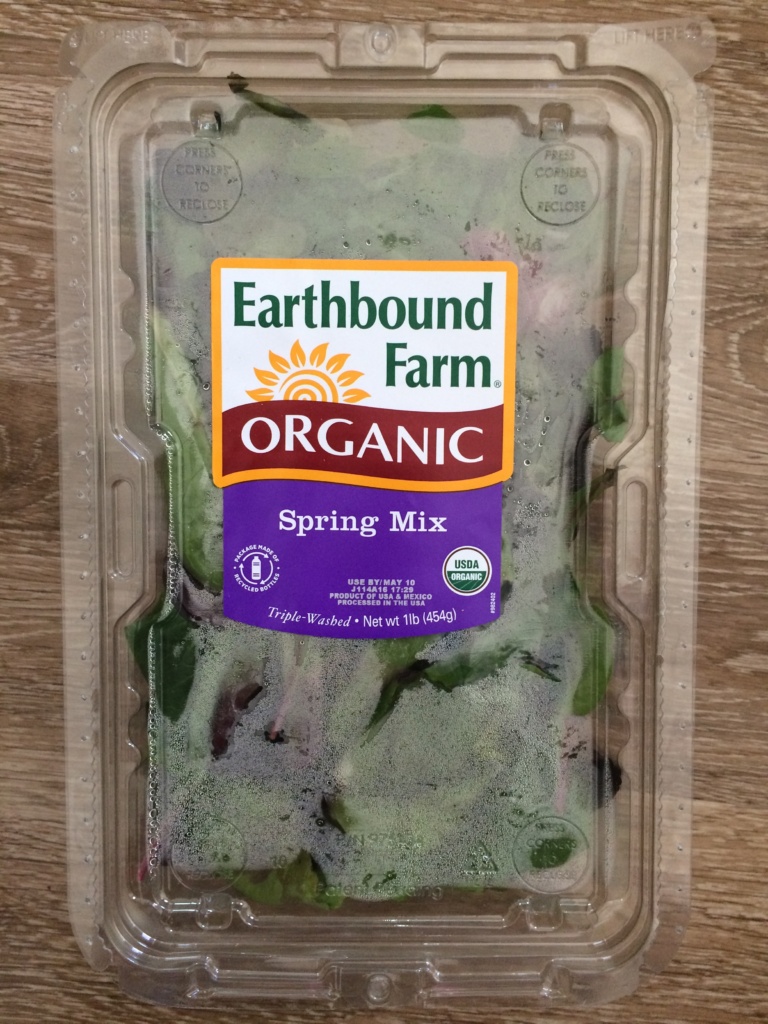 Frozen veggies make great soups and fast side dishes, and both Costco and Sam’s Club have organic frozen produce.

I hate paying $3 for a tiny zucchini. It hurts my soul. Growing up, we couldn’t eat enough zucchini to keep up with the neighbor’s production rates, let alone the two plants in our own backyard. People would ding-dong-ditch zucchini onto our porch in the middle of the night. Free zuchini. Did I mention that it was free? I mean it probably cost less than ten cents to grow, but that’s basically free. I know it can’t be that expensive to grow a tiny, organic zucchini, but I love it so much.

I buy expensive produce sparingly in the winter, and then in the summer I grow my own. Zucchini plants will literally grow anywhere and still mass produce, so buy a couple of pots for a balcony garden, or dig up a little patch of your yard to put a garden in. I promise it won’t disappoint you. Or if you’re not into zucchini, then try tomatoes! They are hardy as ever and only need water, dirt, and sunlight to grow. 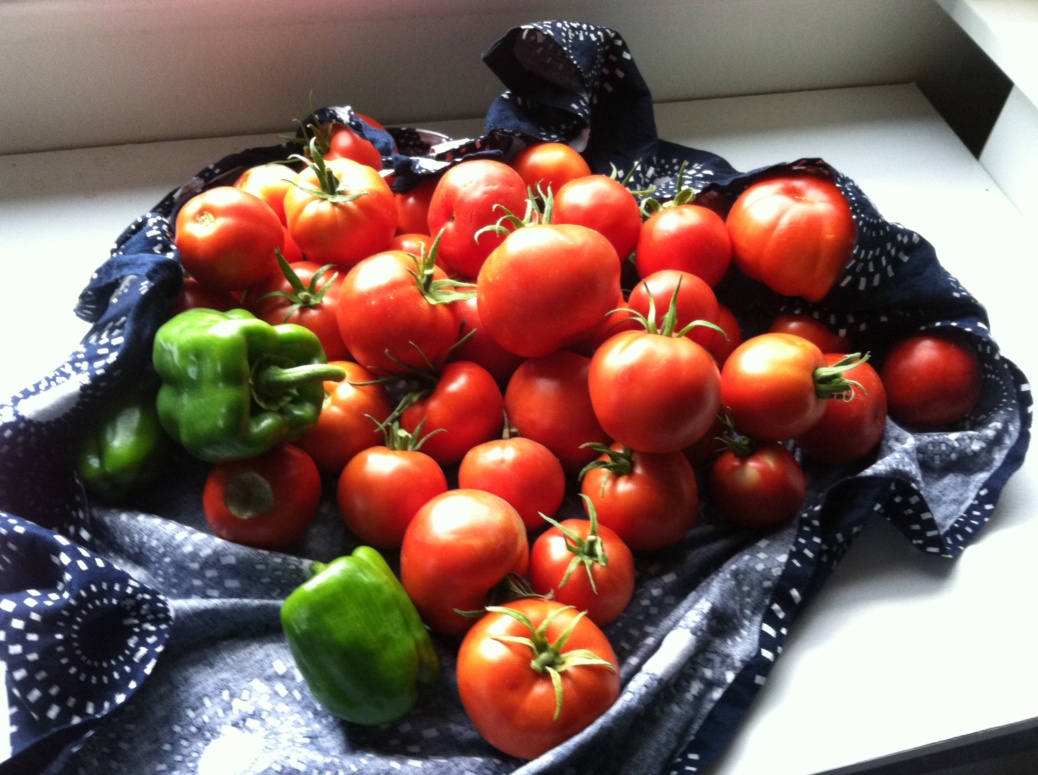 (Tomatoes from our garden 2 years ago.)

If I had spent money on organic tomatoes during that time, I probably would have spent somewhere around $7-8 a week (x16 weeks of production). That’s almost $120 that I saved, and I only spent $30 to start the seeds. It’s definitely worth considering if you can make room for plants!

See? Totally affordable. And still tasty! You may have to sacrifice a little bit of time and effort, but it will definitely help you save money on healthy food.

Come join me as I talk about Paleo lifestyle beyond just food! Get your invite through email!

Have you read our review of True Love Skin Care? Check it out here: http://ourgrainfreelife.com/true-love-skincare/
Share...

1 thought on “11 Tips to Save Money on Healthy Food”

Need to Convert a Recipe to Paleo?

Check out my printable substitution charts! 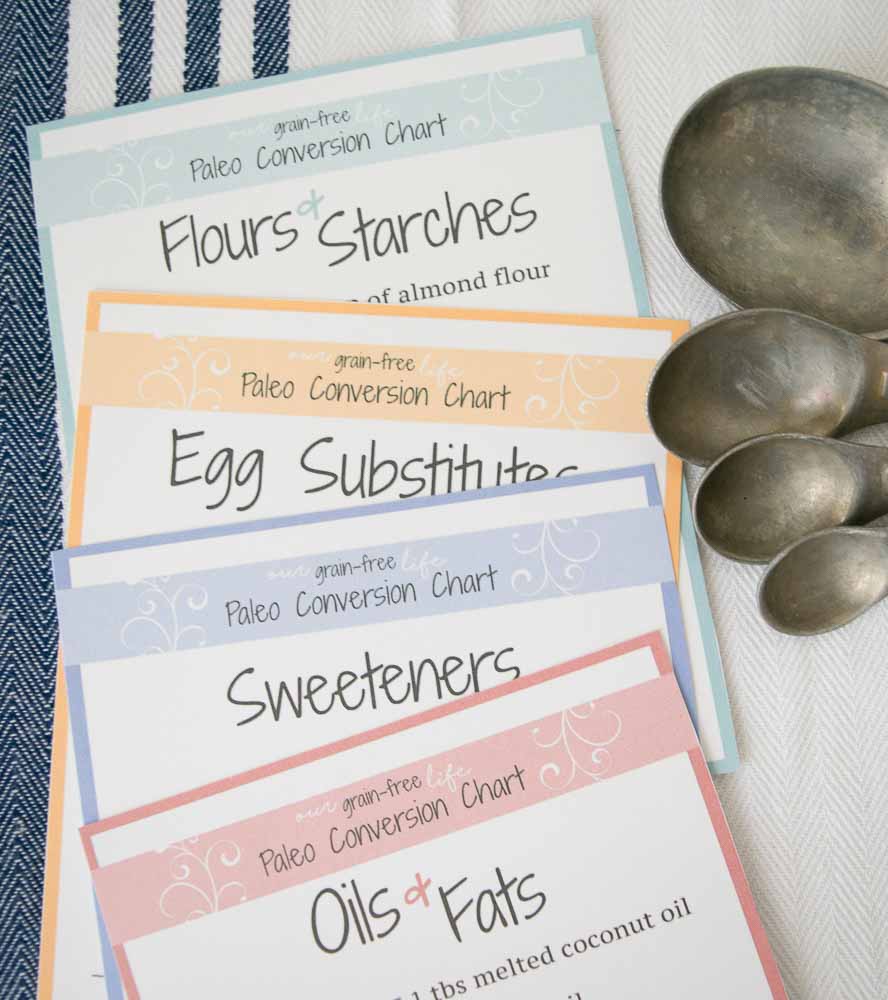