5 Steps I Took to Clean Eating 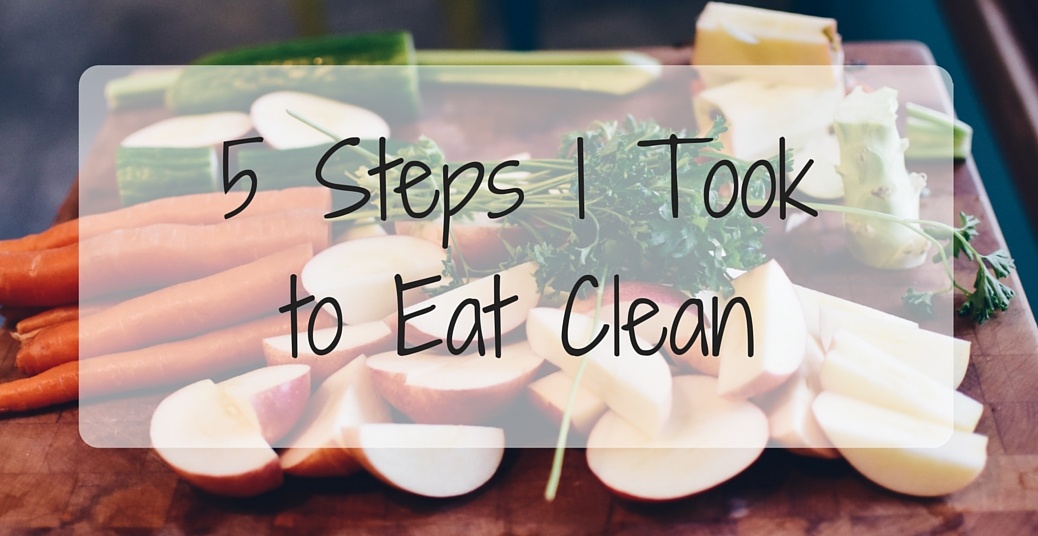 My sister-in-law recently commented that I need more of my story than what’s on my About Me page. And I should. But it’s such a long story, and one that is about learning. I had to learn about clean eating and make small changes. But I think it would be good to tell it here. I’ve been through several different clean eating phases before finally figuring out that my body (and mind) does best eating a diet similar to the Paleo diet. I made small, simple changes over a long period of time that have improved my mood and my energy. I listened to my body (number one rule!) and while I still feel like I have more room to grow and improve, for right now I am doing great.

These are just the phases and step that I’ve taken to clean eating, and I realize that my journey is different from yours. I’ve made decisions based on what my body has communicated to me and I hope that I can inspire you to listen more closely to what your body needs. I also acknowledge that the way I eat now could be improved upon! I’m open and flexible to eater cleaner than I already do. 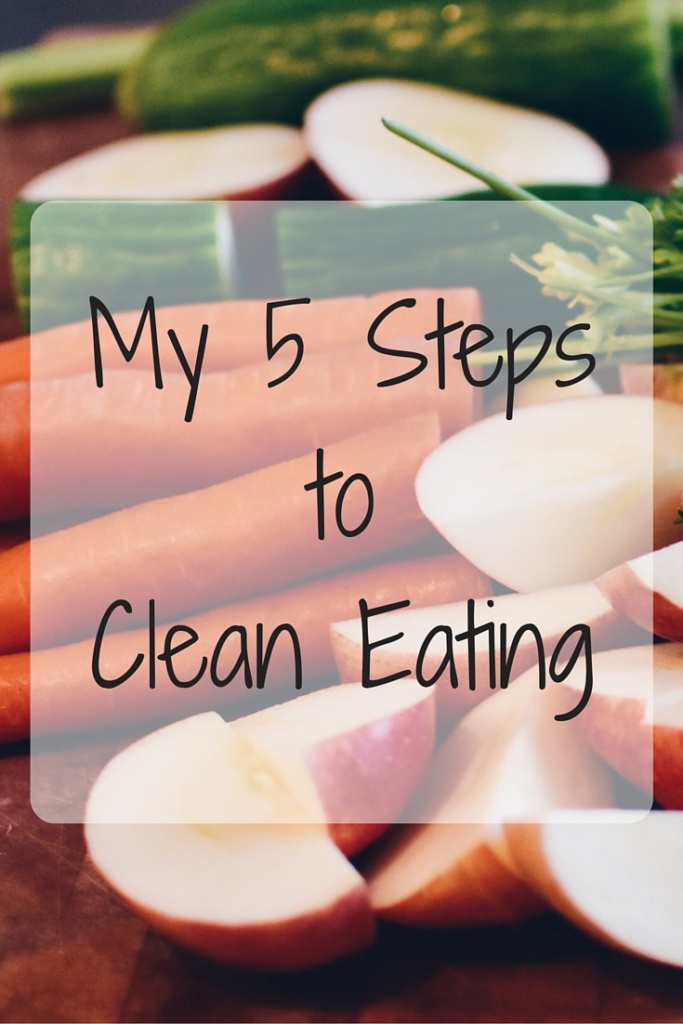 This phase was probably the hardest,, though it was incredibly helpful in cleaning up my diet. I started reading labels, I chucked high-fructose corn syrup to the curb (along with a lot of other ingredients). I ate down on what I had and replaced it with higher quality food items. This whole process probably took me two months, but I remember drinking my last V8 juice and thinking, Wow. I did it. Now what?

Can I say learning curve? Holy moly. This was hard! But I was in college, and I only had to cook for one (though for some reason I made massive amounts of everything…but hey, leftovers, right?), and my roommates were honest foodies that told me what was really bad and what tasted great. This clean eating thing was starting to look great.

A good friend of mine was vegan and told me about the great health benefits, so I decided to commit halfway to vegetarianism. I did really well, balanced my proteins, but I didn’t feel incredibly different and I didn’t lose a single pound. I still ate dairy (and that’s probably why I didn’t reap all of the amazing health benefits). It was wonderful though, because it made me more aware of whole food options, animal rights, and how little meat I needed (as in, none) to survive and thrive. I’m also indecisive at restaurants, so this helped narrow the menu quite a bit (which is great for an introvert with anxiety). During this time I discovered that I have an allergy to soy (pretty bad, actually). So now I was a soy-free vegetarian. Talk about diet restrictions!

It was during phase three that I started dating my (now) husband. He has a major gluten-intolerance and dairy-intolerance, so he obviously eats gluten-free and dairy-free and unprocessed foods (so clean eating). I didn’t give it a lot of thought at the time, we were dating, eating out, and we just ate a lot of salads while we were engaged. But his family was worried about us.

What the heck were they going to eat?

This reminds me of that moment in “Ever After” when Danielle contemplates the impossibility of her relationship with the Prince.

A gluten-free, dairy-free man may love a soy-free vegetarian woman, but what will they eat?

Which of course I wasn’t worried about as this beautiful man wooed me and asked me to marry him. Or as we shoved cake into each other’s faces at our reception. No, it wasn’t until I was basically making two different meals every meal, and buying two different kinds of bread, that I realized something had to give.

It was fall and I missed baked goods. Cookies. Pies. Cinnamon rolls. I could have made them if I wanted to. But I just felt that it would be so rude to fill the entire 400 square feet of our one-hundred-year-old apartment with the smells of gluten whipped into dairy.

So I broke down about a month after being married. I researched the heck out of the internet and pinterest and found all the information I needed to start cooking gluten-free and I confronted my husband. “I’m going to the store and spending as much money as I need to to start making gluten-free cookies and you can’t stop me.” I think I spent about $80 but it was so worth it.

Phase 4: Gluten-free and Dairy-free Plus Meat

I didn’t switch over to gluten-free intentionally. It was more of a convenience factor. I learned how to make gluten-free cookies, failed at gluten-free breads, and we ate lots of rice and quinoa. This was basically a repeat of Phase 2 for me. I did a lot of cooking and reinventing meals. But the more I cooked and researched new recipes, the more I found that the most delicious recipes, and the recipes that had consistent results, were grain-free (or, as I would come to find out later, Paleo). Especially the baked goods. Rice and oat flours are super dense, but almond flour makes great pastries, cakes, and cookies.

And then I got pregnant. My body went through so many weird changes but the weirdest of all was morning sickness. I couldn’t eat anything, except for Little Caeser’s Pizza and ice-cream for the first 4 weeks (so healthy). So I started eating meat again, because it was the one thing I could keep down. I’m glad I listened to my body and allowed myself to be flexible enough to go in this direction.

Fast forward 11 months after getting married, and I gave birth to our little guy. I was breastfeeding him and eventually found out he was allergic to dairy. So I quit eating cheese and ice cream, and we all got more sleep at night. I breastfed for two years and during this time I realized that my face no longer had as much acne as before, leading me to wonder (and test, later) whether dairy caused my acne (Answer: YES).

My anxiety made itself known to me (and to my husband) shortly after the birth of our sweet little guy. I’ve always had it (the signs were everywhere) but I started to notice it more now, as I listened to my body more and more. Things were getting worse in some ways (I started having obsessive thoughts about death and suicide). So I experimented with my food to see what helped and what hurt. Grains and sugar seemed to be culprits, and if I went a few days without them the thoughts went away and my anxiety became manageable (not cured, but manageable). After a year of on and off eating Paleo, I fully committed because I could see the amazing benefits for my mind and my spirit. I wouldn’t say that things are perfect, but I can manage my life a whole lot better now. I do still have sugar occasionally, but its very limited.

Once I found the place where my body needed to be in terms of diet, I started focusing on cleaning up my diet by switching over to organic produce, drinking distilled water, looking for non-gmo foods, and choosing very carefully what companies to support. We research restaurants, read labels in grocery stores, and go with the best options we can find. We only eat hormone-free/antibiotic-free meat that is grass-fed and/or humanely raised or we eat more vegan recipes. And I research everything. I also support local, small companies when I can.

I started this blog originally to show people that it was possible for a bird and a fish to live (and eat) together. Now it has grown with us as we’ve detoxed our home and practiced holistic health.  My goal is to create more vegan recipes so that I can eat less meat! I would also love to stop buying produce from the grocery store and start buying it from local farmers and co-ops. I have lots of goals, but the point is that this is a journey. And wherever you are at in your journey towards better health, just keep moving forward.